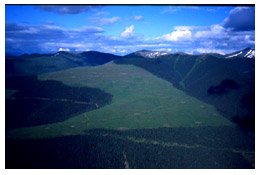 For decades, the region’s economy has been dependent on the forest industry. Sawmills, logging contractors, and related spin-off industries have traditionally made up the bulk of employment opportunities. Little secondary manufacturing exists in the region, so raw or partly processed materials (e.g. veneer and lumber) are exported in large quantities for further processing outside the region. This economic structure requires massive flow-through of wood, and as a result cutting has proceeded at an accelerated rate for the past three decades, leaving a legacy of unsustainable harvesting imprinted on the landscape. Data from the Ministry of Forests show that the Annual Allowable Cut (or AAC: the volume of wood harvested annually) is set at a level nearly twice that of the MOF calculated Long Term Harvest Level.

Today we face a declining timber supply and uncertain international markets for wood products. With little diversity in the local economy, this uncertainty threatens the communities that have traditionally depended on the forest industry for their bread and butter.

Currently, a significant economic shift is on the horizon in the Headwaters bioregion. While the forest industry struggles, other sectors such as tourism are emerging as major contributors to the economic mix. However, there is also potential for large-scale industrial tourism to be as harmful to the environment as industrial forestry. There is a need to manage economic change at the community level and to plan for a future that is both ecologically and economically viable.

It has become evident that conservation and economics are inextricably linked. Unsustainable economies undermine the ecosystems that provide the wealth they depend upon. Similarly, conservation initiatives, such as the designation of protected areas, can cause economic hardship if a region’s economy is based on resource extraction alone. If we are to achieve our conservation goals, we must also address the structure of the region’s economy.

FHA’s Economic Transition program is designed to facilitate the community discourse and collaboration needed to achieve long-term sustainability. We believe that workable solutions, both economic and ecological, must be developed at the community level with the involvement of those people who are most affected by change. The first step in this program was recently completed with the release of A Socio-Economic Profile of the Robson Valley. This report, produced by Larry Stamm

Over the past few years, members of the largely forestry-dependent communities in the Robson Valley have begun to recognize the importance of a diverse economy in community stability. Numerous surveys and reports have been produced in the meantime in an attempt, both to define the economic dependence of these rural communities on resource extraction, and to describe the dominant perspective on where the economy should go. Some studies even went one step further to make recommendations regarding diversification. However up to now the results have all been the same; reports are notoriously forgotten and the economic situation in the Robson Valley becomes more and more unstable as markets fluctuate, soft-wood lumber disputes continue and land-use conflicts become increasingly tense.
One possible reason for the apparent inapplicability of past reports is that they have been largely produced by academic researchers. This is because, although residents are much more familiar with the economic, social and population trends of their own community, there are few who are specifically trained to analyse and understand population data. The task of profiling the economic situation has therefore generally fallen to people outside of the valley who cannot necessarily understand how the community may respond to social change, capitalize on new opportunities or mitigate and avoid potential problems associated with economic growth.

Over the past year, the Fraser Headwaters Alliance has recognized the need for a local initiative toward economic diversification and in response has worked, together with the Sonoran Institute to train a member of the community in statistical analysis. Larry Stamm has now collected, collated, analysed and described the population and economic data in the Robson Valley for the past four censuses. Included are data from and comparisons between McBride, Valemount, the rural areas of the Robson Valley, The Fraser Ft. George regional district, Prince George, the province of British Columbia and the country as a whole. The analyses compile and report on the most widely understood indicators of economic, social and political change. These indicators include data on population changes, age and gender distribution, migration, education, housing, employment (rates by place and industry), and income.
“A Socio-economic profile of the Robson Valley” is now nearing completion. It indicates, in general, that the Robson Valley appears to be a community with an ageing population (all age groups under 45 years are decreasing in size) that is undergoing a rapid transition from a forestry and agricultural based economy (see figure). This economic transition is creating significant stress within the community and the data suggests that the community is as unstable under a one-sector tourism based economy (with variable but low incomes) as it was when historically dependent on forestry and agriculture. It is likely that the communities in the Robson Valley, like in other parts of the province, will require diversification into all economic sectors if they are to be secure and stable into the future.
The socio-economic analysis is the first phase of a three part project which was designed to result in a more diverse, more stable economic strategy. The three phases are:
Phase 1: Produce a report on socio-economic trends in the Robson Valley
Phase 2: Initiate (where necessary) and participate in community discussions regarding economic diversification in the Robson Valley. It is hoped that the report will be utilized by groups such as the “McBride (or Valemount) Economic Adjustment committee”, and that, together with other residents interested in participating, a strategy for ensuring a sustainable economy may be designed.
Phase 3: Implement the economic diversification strategy defined in phase 2.
While FHA recognizes that this is an extremely challenging project and that it involves a real commitment (on the part of the organization and by members of the local community), it is hoped that the project will assist the valley in its emergence as a more stable community with a wide range of economic sectors to sustain it into the future. It is imperative that members of the Robson Valley community are involved in the process. Please contact the FHA office if you are interested in assisting with this important work or participating in the ensuing discussions.